The Future is Composable: A Conversation with New MACH Alliance President Casper Rasmussen 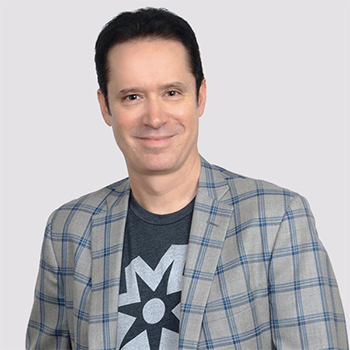 Talking with Casper Rasmussen is, in a word, cool.

I don't just mean cool like he's some newfound celebrity, hanging out behind a velvet rope at the "Coolest Tech in Town Club" (a nod to Forrester's Joe Cicman). And it doesn't hurt that he's based in a hip city like Copenhagen, helping to lead a global digital agency during a period of seismic change.

All points in his favor.

But what really makes Casper so cool is the adept, confident, and effortless way he shares his vision of a composable future – one that's already taken root and starting to flourish.

I caught up with Casper about his recent induction as the new president of the MACH Alliance, where he's become the defacto figurehead for the composable movement. He has big shoes to fill as Sonja Keerl – formerly head of Product Marketing at Contentstack – hands over the reins. During her tenure, the Alliance has achieved some impressive milestones and become a lightning rod of attention across the market.

This role seems perfectly aligned with Casper's work at Valtech, a global systems integrator, where he's shaping the company's composable strategy as SVP of Technology. Valtech was also one of the founding members of the Alliance, so it's fair to say that Casper has been tending to this baby since birth.

This was not our first conversation, mind you. A few years ago, we chatted over beers in Boston during a Boye & Company CMS Experts meeting. Back then, we were all waxing philosophically about the explosive trend of headless and the ever-present gauntlet of personalization.

One pandemic later, and those conversations have evolved: Covid-19 catapulted us through years of digital transformation in a matter of months, with e-Commerce leading the explosion. Market winds shifted, and DXP monoliths hungrily consumed CDPs and other technologies to build more expansive offerings.

At the same time, a "contrarian chorus" around composable started to scale. And scale it has – thanks to the relentless contribution of leaders like Casper. As the new president, he has ambitious plans for the MACH Alliance and how it will continue to shape the composable landscape.

"Composable is way beyond commerce," he said, commenting on the need to grow its budding potential. In the same breath, he talked about the importance of the MACH community to socializing and evangelizing the mission of the Alliance. "[We have] a big fan base, but we can't fully engage yet. We can do much more with the community through education and networking – and extend more as one."

The Rise of the MACH Alliance

Composable. The word has inarguably become a firebrand in the digital experience lexicon, supplanting "headless" as the toast of the town. While the interconnectedness of these concepts is undeniable, composability is expanding the surface area of MACH (Microservices, APIs, Cloud-native, Headless) and driving a wave of debates around the virtual water cooler.

But this is where the MACH Alliance had endeavored to make its impact: by helping the market understand the value of composable and building a trusted bench of evangelists and ambassadors to help carry the water. And, of course, supporting enterprises to make better decisions when selecting composable, MACH-ready solutions.

Founded in 2020, the MACH Alliance aims to "future proof enterprise technology and propel current and future digital experiences." They're like the Guardians of the MACH Galaxy, fighting to maintain universal standards and protecting the value of MACH through education, thought leadership, and the adoption of rigorous policies.

Comic book heroics aside, the MACH Alliance is really a grass-roots community of best-of-breed enterprise technology vendors, system integrators, and key infrastructure "enablers" like AWS. It's these participating members – now over 60 strong – that validate the Alliance mission and amplify its growth and reach.

A further testament to its success, the Alliance just held its first international conference, MACH One, in London this past June. The event offered a range of content and use cases trumpeting the potential of composable solutions. I asked Casper what he thought of the experience and what it was like to see the movement materialize in person.

"When we went to MACH One, being in person confirmed that everyone had embraced the Alliance," he said. "There was no commercial agenda. The presentations and purpose – the sharing and caring – we were extremely proud to facilitate the networking and conversations that happened."

The rapid growth of the MACH Alliance is a clear reflection of the market's shift towards composable, which is precisely where Casper plays. There's no question that interest is building.

But just how big is that interest?

Measuring the Growth of MACH and Composable

I asked Casper about a recent study commissioned by the MACH Alliance called "Enterprise MACHified 2022," which seems to codify that MACH adoption is high on the list for tech leaders.

"It's business contextual," he said, clarifying that MACH is not just a technology-first strategy but a reflection of business values as well. This is creating more attention at a leadership level.

I asked if there were specific industries that were appreciating faster adoption of MACH. He said his hunch is that retail, CPG, and automotive were seeing the most movement. This is because they share common traits of being multi-channel with higher propensities for digital customer interaction.

He also pointed out that these industries continue to have more traditional channels like apps and websites, but that's changing – and as a result, they require more channel agnosticism. This is where composable is proving its value as an accelerator for brands adopting omnichannel strategies.

While the study shed some light on the human component as it relates to IT departments, Casper revealed that one of the biggest challenges to embracing MACH is the talent gap.

"Organizations have a dilemma because they need to have the right talent on their team," he said. "In this market research and at the MACH One Conference, this was called out as a point of resistance or hesitancy because of the new skills required to build composable solutions. [The MACH Alliance] can help facilitate this shift."

With people being a key part of the challenge, Casper believes that education will become a central focus for the Alliance. "A lot of companies and organizations are facing obstacles with skills like DevOps," he said. "Transforming monolithic enterprises with MACH requires a different type of approach using modern frameworks and tools."

As such, a big part of Casper's vision is to develop training, coursework, and other educational materials to help shore up the skills gap. But it doesn't end there: he also sees the need to enhance the knowledge base around business practices, from understanding procurement to making the ROI case. This might be delivered through more formal academic experiences such as webinars that focus on frameworks, headless, and cloud services.

Along with the educational investment, I asked about any plans for developing individual MACH Alliance certifications or badging. He said they are discussing the idea and exploring what would be required from a skills perspective.

With its rise in popularity, "MACH" and "composable" have become the domain of marketing. Even the most monolithic of monoliths are espousing their decoupled attributes across a multitude of media. Most recently, Salesforce added to the chatter, unveiling its new composable storefront for headless commerce.

This adherence to strict governance is two-fold. First, it helps reinforce the core benefits of MACH for the entire industry, providing a source of truth that remains clear and consistent. And second, it delivers peace of mind to buyers who are looking for truly composable solutions amidst a climate of confusing messages.

I asked Casper about the challenges that exist with "separating the wheat from the chaff" and maintaining MACH baselines within the ranks of the Alliance. He noted that the organization's pure-play MACH requirements will continue to be firm – and potentially firmer.

"On the marketing side, the picture is blurring," he said. "Composability is being thrown all over the place. [The MACH Alliance has] a responsibility for evaluating criteria to confirm that these organizations adhere to MACH standards – ultimately unlocking the value promises we protect." He went on to say that the evaluation program will continue to fall to the Alliance's admissions board: an unbiased panel of industry professionals that manage the application process and ensure ongoing compliance.

It's worth noting that the Alliance has previously revoked memberships based on acquisitions or other compelling issues that have altered the posture of a MACH-certified vendor or SI. Tough? Sure. But necessary to safeguard the value of its MACH standards.

To MACH or Monolith – Is That the Question?

While the Alliance has sparked greater interest across the composable movement, monoliths still dominate the market. There are obvious reasons for this, from cost to complexity. But as Casper pointed out, composable is "exiting the infancy stage" for organizations that are embracing omnichannel and eyeing the cost and impact of replatforming.

It's fair to assume that monolithic platforms will continue to "MACH Wash" their wares and perhaps become more componentized over time. As Casper frequently mentioned, having demonstrable use cases that illustrate the real impact of composable is critical to developing trust – particularly for enterprise organizations that still don't know what MACH is. (One of the best examples is a podcast featuring the Lego Corporation, and totally worth a listen).

As I was writing this piece, I came across a LinkedIn post from Kelly Goetsch, the Chief Strategy Officer at commercetools and a MACH Alliance founder. He summed up his perspective on the MACH-versus-monolith debate quite elegantly:

"I love MACH, but regularly tell people' MACH is not for you and then promptly refer them to Shopify. MACH isn't for everybody – whether due to a lack of a proper use case or an inability to successfully implement and care for it. Blind, unexamined adherence to any technology or principle is cult-ish. Every choice has tradeoffs."

As companies wrestle with those tradeoffs, the MACH Alliance is providing a voice of guidance. Even in a highly competitive landscape, it has managed to build community inroads, uniting platform vendors and SIs around a shared vision – and sharing that vision with the market. Whether MACH or monolith is right for an enterprise, the Alliance is helping to make those decisions easier and more concise while showcasing the benefits of a composable strategy.

When I asked what the future holds, Casper had a lot to share about the evolving technology landscape. We talked a bit about the rise of experience orchestration and its validation by Gartner – and how platform vendors like Uniform and Conscia are once again changing the space.

Technology aside, he shared an undeniable excitement about the human fabric of the community. "We've expanded our board to nine seats, and we have magnificent, brilliant people that have great experiences around waves and movements like Jamstack," he said, gushing at the prospect of Holly Hall and ambassadors like Sana Remekie further enhancing the mission.

If one theme was evident throughout our conversation, it was the critical importance of education and community to the composable movement. To that end, Casper is using his voice to shape the investment in knowledge on every level, from technology to business practices.

"Customers entering the space need education to lower the barrier," he said. "Not just academic – but real world."

If the future is composable, it's because Casper is taking us there.

And yes. It's going to be cool.