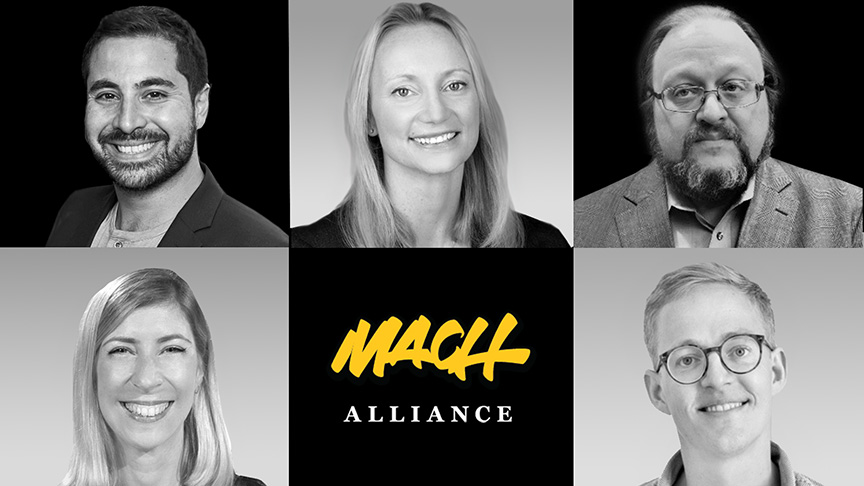 There were no crystal balls at last week’s MACH Alliance board meeting – at least none we could spot. But there were still quite a few salient prognostications being conjured during an unscripted Q&A with select partners and media.

Moderated by Holly Hall, managing director of the MACH Alliance, the lively discussion covered a range of pertinent topics, namely the economic slowdown looming over 2023.

The roundtable kicked off with two earth-shaking words: economic downturn.

Of course, this subject is on everyone's mind, particularly those in the technology sector where jobs are already being shed by the likes of Amazon and Adobe. Are these the canaries in the proverbial coal mine?

While many economists have been chattering about an impending “chill” on the horizon, the Wall Street Journal is now forecasting a 63% probability that the U.S. market tips into recession in the next 12 months—which in turn could ignite a global contagion.

Despite the impending challenges, the discussion turned to the rising role of the CFO as an activator, particularly for B2B organizations looking to reduce costs and make critical decisions around operations. Inviting CFOs into the conversation is helping to accelerate and optimize delivery—which is ultimately driving the customer experience.

As Jon Panella pointed out, one of the biggest impediments to businesses and manufacturers in 2022 has been the constant disruptions to the supply chain, which has impacted the customer’s expectation of same-day delivery. Despite significant technological advances around supply chain visibility, the lack of access to resources continues to be a drag on businesses as they plan for next year.

According to Tarek Nseir, the pace of transformation is accelerating across the enterprise. In B2B specifically, he is seeing signs that businesses are adjusting their operating models to be more composable—and that MACH is becoming a force.

Casper Rasmussen echoed this, stating that in the B2B space, there’s a growing degree of MACH preference and that buyers are looking for services. He went on to say that the MACH Alliance is providing a “rubber stamp” for customers, allowing MACH vendors to achieve greater traction.

“We will continue to provide innovation and optimization for the buyer’s journey,” said Rasmussen.

He also talked about the continued development of tools to aid in the decision-making process, improve TCO, and help organizations understand the costs of composable versus a single monolithic vendor.

Enhancing the investment in education

There was broad consensus amongst the group on the Alliance’s investment in education, from skills training to enablement. As Rasmussen noted, this is about “helping companies from within” to improve their internal dynamics.

Gordana Vuckovic also noted that education is a key activator for transformation—but that it needs to be sustainable. The problem in the past, she said, is that experts can provide consulting and guidance but ultimately disengage from the relationship. Organizations need persistent access to knowledge in order to make MACH and composable strategies attainable.

According to Nseir, there has been an enormous deficit in education for B2B companies in particular. Panella agreed: “Being part of the MACH Alliance is a must,” he said. “Clients are coming in, asking ‘how can you help us follow the path?’”

As Panella pointed out, the scope of composable offerings from ISVs and vendors has become more mature, allowing them to scale their products and services with greater ease—much like traditional monoliths. This seems to translate into a more bullish view of growth for the composable category in 2023.

But what’s driving platforms, agencies, and integrators to embrace composable? According to the group, the ability to innovate and test quickly has had the most dramatic impact. Companies don’t know which models are best, so composable solutions are streamlining the lifecycle of spinning up and down and delivering almost anywhere via headless and microservices. Because this can be replicated over and over without the rigors of “rip and replace,” the entire process becomes much more efficient.

Rasmussen also spoke about the need for differentiation through composable, and how MACH has helped organizations pivot along the way. He went on to espouse the benefits of more meaningful personalization behind products and brand experiences that enhance loyalty and equity.

B2B versus B2C and tracking the “iterations”

There was some pointed discussion around the challenges facing B2B organizations and the adoption of MACH and composable. As a matter of context, it was suggested that most B2C companies might be on their third “iteration” of a strategy or stack, while B2B organizations are still on a first or second wave of transformation. This is likely why Alliance members haven’t seen as much greenfield opportunity in B2B (as of yet).

Despite the lag, the group did point out that B2B organizations tend to have better data than their consumer counterparts, enabling them to build better experiences around products. The standout observation: B2Bs have known customers, but not the required tech stack.

The group also talked discussed the opportunity event horizon for businesses to embrace MACH. Even those companies tethered to a years-long contract with a monolithic platform can start small and build inroads toward more advanced architectures in the future.

Their advice? Don't get stuck looking at the larger view. Instead, think in “smaller chunks.”

MACHifying more of the stack

One question posed to the roundtable was about traditional monolithic platforms becoming more composable. Prompting the discussion was Salesforce, which launched its Composable Storefront in August. A fully-customizable, headless digital storefront, the new service allows users to make changes on their eCommerce site with greater speed and flexibility.

The solution seems to fit a more composable mold (it's in the name, after all). But does it meet the MACH threshold?

The other specific example they pondered was ERP, and whether companies like SAP would evolve their architectures to become more composable—or face competitors with MACH-oriented offerings.

Rasmussen replied, suggesting that these layers of the stack continue to reign as monoliths because there has been no other place for planning and resource data to live within the stack.

To be MACH or not to be, that is the question

The group also reflected on the efforts of other DXPs like Salesforce to position themselves as composable players in the market. When asked if these platforms might fit the MACH mold and become Alliance partners, Rasmussen reinforced the guiding principles of the organization, which mapped to his comments in a previous interview we conducted a few months ago.

“There are key qualities and attributes that need to be present,” he said. “[These organizations] are not there yet.”

This spurred further comments from the group about the key differentiators between MACH and composable. While the MACH Alliance believes fully in composability, the movement falls short of the specific tenants crystallized by the Alliance charter. As John Panella pointed out: “All MACH solutions are composable, but not all composable solutions are MACH.”

That may be true. But continuing to clarify the differentiators must be a central focus, particularly as more organizations seek guidance on their composable journey.

It doesn’t take a crystal ball to see that education will be the most critical initiative for the MACH Alliance in 2023. While issues like orchestrating the data layer or finding skilled practitioners will remain persistent challenges, it’s clear that teaching and leading are the essential tools for driving greater adoption.

While many organizations are predicting less-than-rosy economic conditions over the next 12 months, the MACH Alliance sees opportunities for accelerating growth by decoupling the innovation cycle. For B2B companies and manufacturers that have struggled due to supply chain issues and unprecedented inflation, the move into MACH may seem daunting—but also ripe with possibilities.

On a final note: holding these open roundtables is applause-worthy. It speaks volumes about the Alliance’s commitment to its members and provides a layer of transparency to the broader market. It also underscores the deeper mission of supporting MACH at a community level, where a "rising tide lifts all boats."

Kelly Goetsch, Chief Strategy Officer at commercetools and a leading voice within the MACH Alliance, once observed during a CMS Experts meeting that there might be a day when the Alliance is no longer needed—thus reflecting the market’s full pivot towards MACH. Until then, it will serve an essential role in helping everyone realize the promise of a composable future.